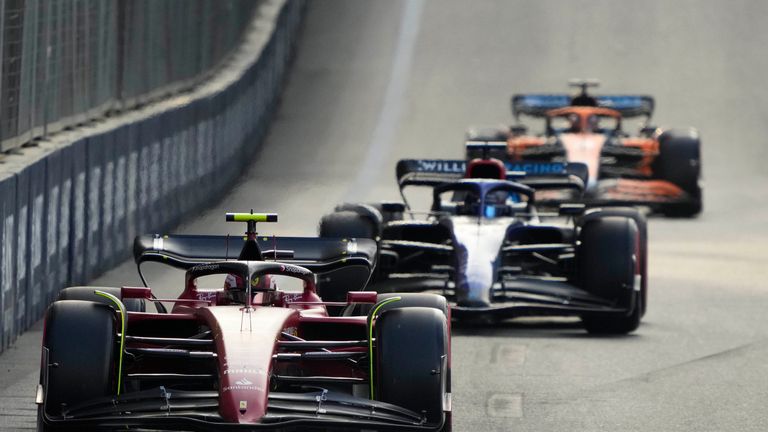 In a reverse of Practice One, Leclerc led Perez by a quarter of a second, with world championship leader Verstappen a further tenth back as the drivers faced challenging conditions at the breezy street circuit.

Fernando Alonso took advantage of Carlos Sainz’s failure to complete his two final attempts at flying laps to take fourth ahead of the second Ferrari for Alpine, while Pierre Gasly was sixth for AlphaTauri.

George Russell was seventh for Mercedes, but his team-mate Lewis Hamilton finished 12th after a torrid day during which the seven-time world champion’s Silver Arrow appeared to struggle more than most with severe bouncing on the straights.

Verstappen came into the second session with concerns over his rear wing, which had appeared to flex excessively in the first hour of action, and was understood to have led to complaints from other teams. 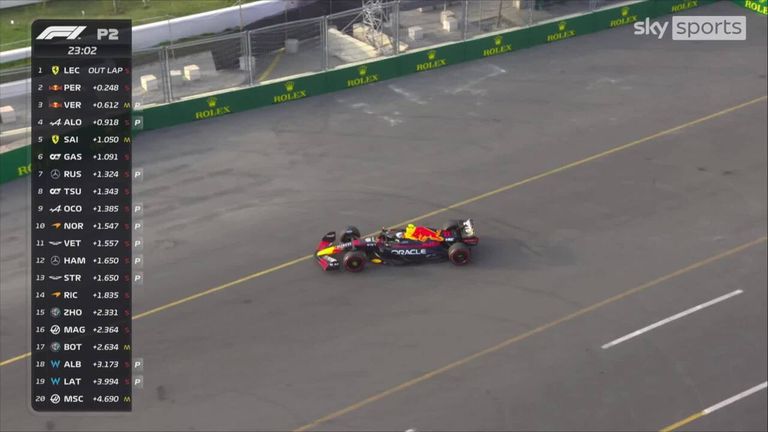 The Dutchman had to wait more than 10 minutes to get out on track in P2 as Red Bull continued to work on his car, with the team ultimately deciding to mirror the setup on Perez’s car, which hadn’t experienced the same issue in P1.

“(We) tried to fix it of course,” Verstappen said. “I didn’t hear anything in P2 so I guess it was alright.”

While Red Bull worked in the garage, Leclerc had already gone to the top of the timesheets for Ferrari, although his leading time – at that stage – appeared to have been aided by a slipstream from the Williams of Nicholas Latifi in the home straight. 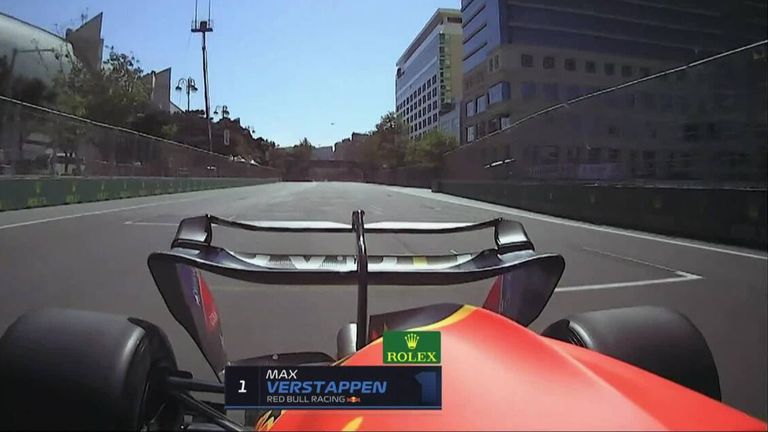 Verstappen eventually made it on track and showed signs of promise as he closed to within a tenth of Leclerc, but as all the cars switched to soft tyres midway through the session, the Monegasque proved his pace was genuine.

Leclerc, who is looking to end a streak of four races without a win, improved by another half-second as he set a 1:43.224, which ultimately proved out of reach for both Red Bulls.

The second Ferrari of Sainz appeared capable of challenging, but the Spaniard blew one flying lap with a lock-up before his next attempt was stopped by yellow flags after Perez went off track.

That trip off the circuit for Perez was one of several seen throughout the day, as drivers struggled to control F1’s all-new 2022 cars on the highly challenging street circuit, which mixes tight corners with high-speed sections.

There appeared to be few positives for Mercedes to take from the opening day in Baku, as they once more failed to build on the promise of an improved performance at last month’s Spanish GP.

Friday’s display was more reminiscent of the Silver Arrows uncompetitive showing in Monaco, with Hamilton out of sorts once more as he finished more than 0.3s behind team-mate Russell. 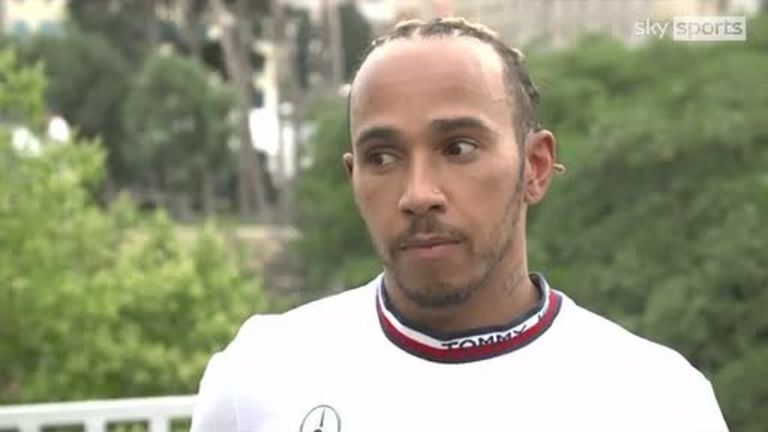 The seven-time world champion appeared to suffer from extreme bouncing on the main straight, and repeatedly expressed his frustration over team radio throughout both sessions.

Hamilton said afterwards that his back was “sore” and explained his poor performance in P2 was impacted by an attempt to try an alternative setup, which appeared to fail.

With Mercedes a long way back from Ferrari and Red Bull, their hopes of claiming a record-extending ninth consecutive constructors title appear to be fading with the gap likely to widen on Sunday. 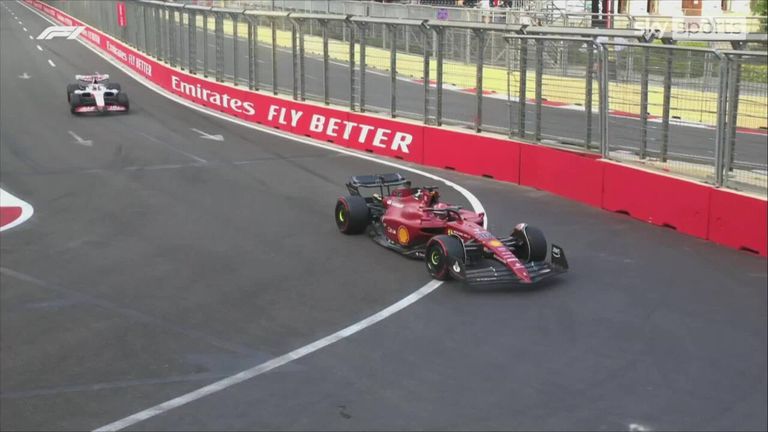 While there was cause for positivity, Leclerc’s Friday was not without blemish and the Monegasque’s recent run of bad luck will ensure he enters the weekend with caution.

Along with a spin during the session, Leclerc reported a loss of power in the closing stages and then engaged in what appeared to be a tetchy radio exchange with his engineer, despite the issue apparently being solved.

Tensions are perhaps running high at Ferrari after Leclerc was denied a likely victory in Barcelona by a technical failure, before a strategy error saw him lose the lead in Monaco after securing pole position.

Those moments contributed to a run that has seen him fail to win any of the last four races after he won two of the first three to start the season, with a 46-point lead over Verstappen having become a nine-point deficit. 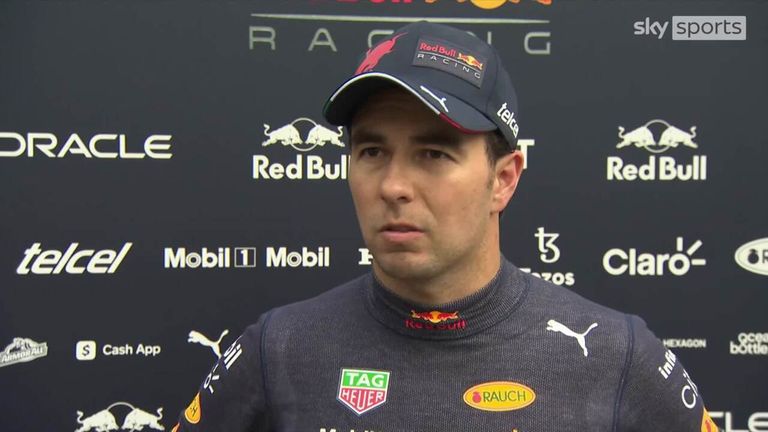 The main beneficiary of Leclerc’s misfortune in Monaco was Perez, who continued his strong form by setting the pace in P1, and once more outperforming his team-mate in P2.

Buoyed by the award of a two-year Red Bull contract as well as his Monaco win, Perez only enhanced his credentials as a genuine title challenger, with the Mexican only six points back from Leclerc in the standings.

“We probably took some wrong directions with it and we were just exploring and it was not coming and we tried to sort out our problems.”